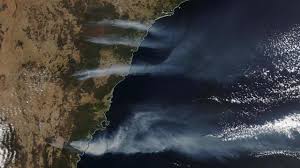 A fire in the Snowy Mountains region and one in the Bega Valley on the south coast of New South Wales (NSW) state both flared up, with emergency authorities warning residents to get out if they did not plan to defend their properties.

“Fire dangers are just starting to peak, and we’re in for a long afternoon and night across many areas of NSW,” the state’s Rural Fire Service said on its Twitter account.

The Bureau of Meteorology warned that “damaging winds” were driving up fire dangers in some regions, while the country’s biggest city was again forecast to wallow in hazardous air quality levels under smoke palls from some 90 blazes burning across the state.

Since September, hundreds of wildfires in Australia have killed 29 people as well as an estimated 1 billion native animals, while incinerating 2,500 homes and a total area of bushland one-third the size of Germany.

The disaster hit the Christmas and summer holiday season, emptying out caravan parks and hotels, devastating peak earnings for businesses dependent on domestic and foreign tourists.

The Australian Tourism Industry Council estimated the revenue loss industry-wide at A$2 billion ($1.4 billion), including forward sales and the physical damage to tourism facilities across regions ravaged by bushfires.