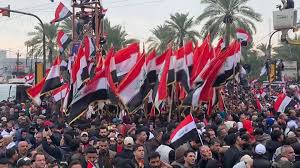 Separately, at least one of five Katyusha rockets fired at Baghdad’s fortified Green Zone hit the U.S. embassy, wounding three people, in a rare direct targeting of the compound, security sources said. Reuters could not independently verify the rocket attacks.

Anti-government protests erupted in Baghdad on Oct. 1 and quickly turned violent. Security forces and unidentified gunmen have shot protesters dead. Nearly 500 people have been killed in the unrest.

The protests are an unprecedented leaderless challenge to Iraq’s Shi’ite Muslim-dominated and largely Iran-backed ruling elite, which emerged after a U.S.-led invasion toppled Sunni dictator Saddam Hussein in 2003.

Demonstrators are demanding that all parties and politicians be removed, free and fair elections be held and corruption rooted out. The government has responded with violence and piecemeal reform. The international community has condemned the violence but not intervened to stop it.

In Baghdad, one protester was killed, police sources and medics said, and more than 100 others hurt across the country after the security forces tried to clear protest camps.